It has been almost a month since I submitted my dissertation for my MA in Environment, Politics, and Globalisation at King’s College London. I thought it would be useful for both myself and anyone interested out there to unpack and explore the many topics I tried to tie together in my paper here on this platform. This is the second instalment of four. 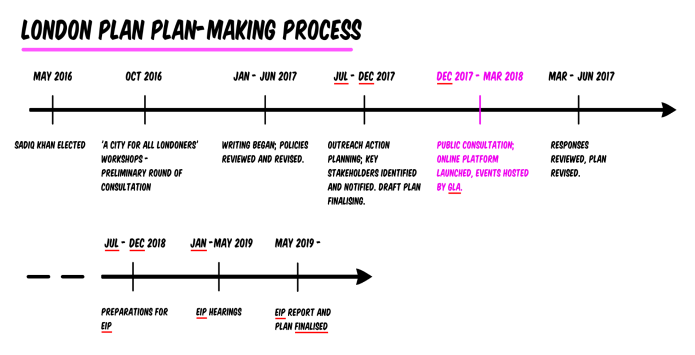 Under the Public Service (Social Value) Act 2012, public bodies are now required to ‘have regard to environmental, social, and environmental well-being in connection to public services’, and that they should consult or find other ways to inform the public of policy change. This is supplemented by a set of consultation principles which act as a guidance to how consultations should be held (Gov UK, 2018). Another set of commonly cited principles derived from a legal challenge — the Gunning Principles — also provide some basic direction for consultations (Sheldon, 2012). Both sets of principles aim to deliver a fair and trusted consultation which allows effective and meaningful engagement at the right time of the policymaking process. Neither of which are set rules that public consultations have to follow, but it is common practice to adhere to the general guidance they offer.

Assessing the London Plan consultation process against some of these principles will offer a useful critique on the supposed fairness and reveal the immense reliance on civil society actors to communicate and network amongst themselves to deliver a successful engagement.

This principle states that consultations should avoid lengthy documents and acronyms to allow for more accessibility to the process. Whilst the London Plan team has taken significant strides in creating the online commenting platform, it is by no means a small, easy-to-read document. One of the interviewees suggested ways policymakers can make use of technology in the form of simulations or visualising tools to present policy visions, rather than rely on text-based representations. Such methods can allow citizens to envisage a holistic and integrated policy outcome, instead of leaving them to try piece together policy impact across various policy areas themselves. Another interviewee also raised similar views in that the length of the document posed as a significant obstacle to ordinary citizens who would like to engage but just did not have the time to do so.

Gunning Principle: Sufficient reasons must be put forward for the proposal to allow for intelligent consideration and response

Both suggest that consultations should provide sufficient and accurate information for citizens or those being consulted to have a meaningful input to the process. This also includes having the knowledge of what the criteria are, when decisions are being made, and whether certain factors are considered decisive. During the period before the public consultation took place, the GLA actively reached out to various known stakeholders in civil society including developers, community networks, and professionals to publicise the document and the upcoming consultation (GLA, 2016a). Engagement with Just Space, for example, began in early 2017, but engagement with other lesser known organisations who could be equally as influential did not begin until the public consultation began. At that point, the draft document was already produced, so there is limited capacity for civil society to challenge and actively influence the policies. This leads onto the next point:

Consultation should not be a reactive process, rather, it should be proactive if policies are truly to be co-created. However, power is still skewed towards policymakers as they alone set the schedule, and determine who to engage at various stages of the process. Taking Arnstein’s (1969) criticism of consultation, it is useless if citizen participation is restricted and its output not seen to directly influence policy decision. At the same time, the public or those consulted need to be made aware of the limits of their influence from the beginning of the process to avoid false expectations. Whilst it is premature to evaluate the outcome of the process, the London Plan consultation is arguably reactive, for the GLA relied heavily on known networks and contacts to form the initial policies, and other members of society are only given a chance to review and react to such proposals at a much later stage. There is limited scope for citizens to actively organise and form a relationship resembling more of a partnership rather than a hierarchical one with policymakers.The bias towards known stakeholders contributes to procedural injustice and inequity within the process, where citizens do not have equal means to influence.

Consultation Principle H: Consultations should be agreed before publication

After the public consultation phase, the London Plan team reviewed and responded to each response received during the consultation. This is, however, different from actively involving diverse actors to shape policies according to diverse interests. Despite regular contact with known key stakeholders like large developers, the top-down approach eclipses the potential for grassroots organisations and ordinary citizens to influence the formulation of policy at that formative stage. Again, this highlights the fact that the process is highly in favour of policy makers and those consulted in the earlier stages of the process as the public consultation phase from December 2017 to March 2018 proffered only a space for reaction instead of creation. The short and late consultation phase against the lengthy plan-making process shows quite powerfully the limited scope for participation and co-creation.

As Culver and Howe (2004: 57) pointed out, ‘the aim of a public consultation is to gain a deeper understanding of the nature and the nuances of public opinion’. However, what happens after gaining such an understanding is often not accessible nor accountable to the public. When analysing the London Plan making process, it is clear that there is a lack of transparency in decision making, which echoes the worries of post-politics scholars. Furthermore, it undermines the ‘intrinsic value in participation’, which has been argued to attract a base level of engagement due to a moral imperative and an adherence to democratic practices (Shipley and Utz, 2012: 30). In order to yield better insights, the consultation should not only be participatory, but also inclusive and deliberative. Despite the strides taken by the GLA in creating a more open and user friendly commenting system online, it does not fundamentally improve the process. Technological gap and other accessibility issues still persist, and the consultation timeline or opportunities for participation have not changed because of this online platform. Inclusivity of a democratic mechanism extends beyond the people involved, but also the range of topics they can discuss, and the length of time in which they are involved (Bloomfield et al, 2001).